“City of Water” beautifully crafted by the Northern Alps and the rich, fertile land

Kurobe City is located in the eastern part of Toyama Prefecture, facing the Sea of Japan. Rich in water pouring from the Northern Alps, it is famous for its beautiful scenery of water bodies and for its produce. On the upper stream of the Kurobe River are Kurobe Gorge, which is one of Japan’s most famous V-shaped valleys, and Unazuki Onsen, which is one of the best hot-spring villages of Hokuriku Region. The region is also blessed with richness in seafood from the Sea of Japan. 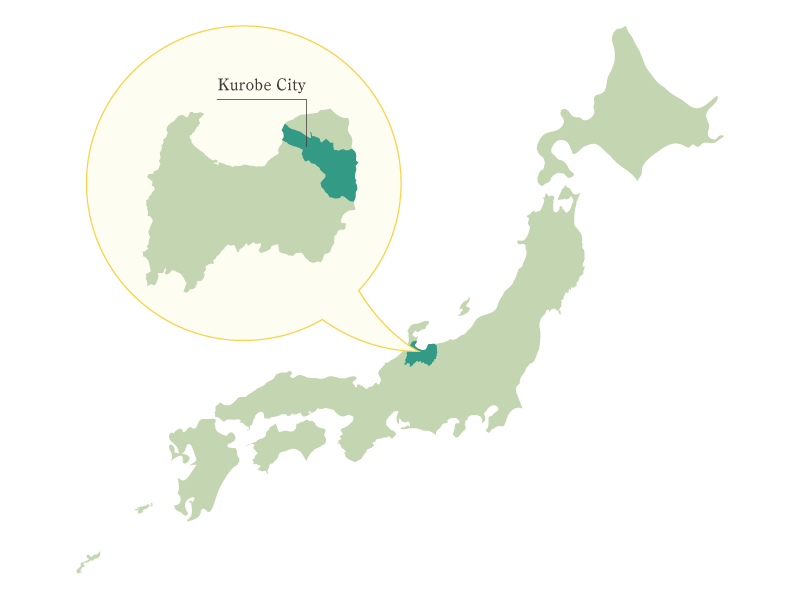 Water from 3,000-meter-high mountains flows straight down to Toyama Bay to a depth of 1,000 meters, thus dropping a total of 4,000 meters. At its mouth, the Kurobe River, one of Japan’s most scenic watercourses, has created a beautiful alluvial fan, unrivaled anywhere in the world.
Pure water nourishes rich produce, becomes groundwater, and then reappears on the surface of the earth as the natural springs called “Shyouzu” at the edge of the fan shape, continuing to enrich the lives of the people. The Tateyama-Kurobe region, which includes the Kurobe River, was designated as a geological heritage called a “Japanese Geopark” in 2014.

Stable, rich, and fertile land created through a history of battling with repeated flooding

Once upon a time, the Kurobe River was called "Shijyuu Hachi ga Se" (meaning “forty eight rapids”) and known as the most dangerous spot on the Hokurikudo Road along with Oyashirazu. Battle with the river continued for a long time and, in the Edo period, Douzan Shiina led a construction of "Junikannoyousui" (a series of aqueducts for supplying agricultural water) using highly sophisticated technologies for the time such as an application of back siphonage. In the Meiji period, fourteen "Kasumitei" dikes, designed by a Dutch engineer named Johannis de Rijke, were constructed at various locations, significantly contributing to flood control in the area.

People who challenged and loved the Kurobe Gorge

A famous mountaineer of the Meiji era, Matsujirou Kanmuri, devoted his life to the exploration of Kurobe Gorge. He was the first person to enter the lower and middle passages, leaving many books and essays.
A documentary noble by Kimoto Shyouji, “The Sands of Kurobe” (Kurobe no Taiyo), depicted the construction of Kurobe River No. 4 power plant. It was made into a TV program and a movie, and became very popular.
Fuyuji Tanaka, whose father was from the town of Ikuji in Kurobe City, visited Unazuki Onsen and Kurobe Gorge, leaving many poems and essays. 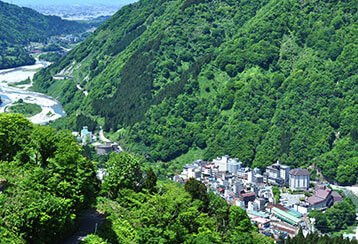 Located at the entrance to Kurobe Gorge, Unazuki Onsen is the largest hot-spring village in Toyama Prefecture, with various hotels and inns located along the gorge.
An open-air spa will give you an extraordinary experience while offering views of the gorge, which, being surrounded by mountains, exhibits a different appearance each season.
The pure, transparent water of Unazuki Onsen is said to be the clearest in Japan. Unazuki Onsen is an alkalescent simple hot spring and is gentle to the skin, being known as “the hot spring for beautiful skin.”
It also yields plenty of hot spring water at 3,000 tons per day. At the center of the town is the easy-to-access Yumedokoro Unazuki Public Hot Spring Bath.

Kurobe Gorge divides the northern part of the Hida Mountain Range into the Tateyama Range and the Ushiro-Tateyama Range, and is the deepest V-shaped valley in Japan.
It appeals to people with its attractive seasonal appearances, such as the lingering snow of spring transitioning to the greens of early summer and to the colored leaves of autumn.
The trokko train winds its way through the gorge, running a total of 20.1 kilometers for 1 hour and 20 minutes. Along the train route are Kuronagi Onsen, known for long time as a "hidden spa," and Kanetsuri Onsen, an open-air spa on a riverbank. Furthermore, beyond Keyakidaira Station, which is the last stop on the trokko line, are Meiken Onsen and Babadani Onsen.

Toyama Bay drops steeply immediately off the coast and contains a complicated submarine canyon called Ai Game, where many fish gather year-round. The Kurobe River also delivers nutrient-rich water from the 3,000-meter-high mountains of the Northern Alps. These features make Toyama Bay a natural fish tank. Almost all the kinds of fish that are harvestable in Toyama Bay can be caught in the fishing area of the Kurobe region because it enjoys many kinds of fish harvested year-round.
Of course, mountains and fields also offer plenty to eat.